In April and May of 2019, four of us worked on a project to capture footage of creative tea and dialogue while a painting emerged in response to “the unending sea of blessings,” a Japanese scroll saying. The plan was to display that painting in my tea hut for a later tea and spoken dialogue session… 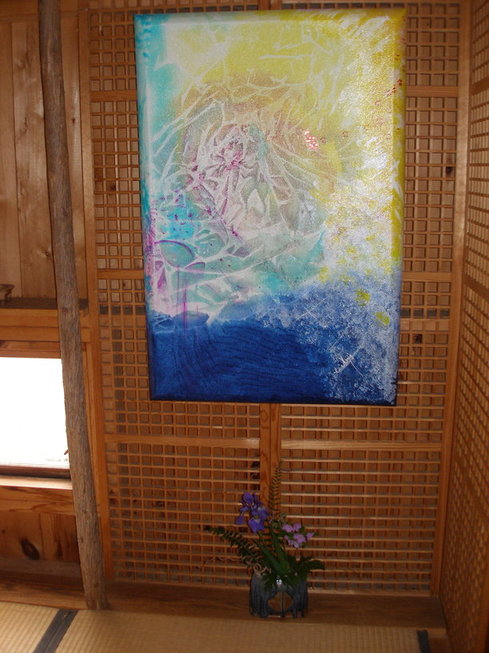 This edited creative tea and dialogue video provides a sense for what occurred over the three sessions of collaborative music and painting including selected spoken reactions and discussions as the process evolved. We had previously discussed and practiced Gregory Kramer’s Insight Dialogue guidelines – Pause, Relax, Open, Attune to Emergence (previously Trust Emergence), Listen Deeply and Speak the Truth. These guidelines are referred to in remarks at various points in the video.

After we shared tea in her living room, Lidia Kenig-Scher worked in her studio as Jim Flavin played a variety of instruments in the next room and videographer, Jeff Klein, captured the action. The materials, tools, and effort involved lent a grounded, down to earth quality to this multimedia dialogue. The video shows how the rhythms and the feeling of the music influenced Lidia’s brush strokes. Jim mentioned feeling a connection even though he could not see the painting.

The tea we drank at the start of the second session had four ingredients. Since there were also four of us, that seemed a great metaphor for our communal awareness that retained what we each contributed to the blend.

The video shows a particularly vivid example of the stages described by Mitchell Kossak in Attunement in Expressive Arts Therapy: Toward an Understanding of Embodied Empathy where periods of seeking safety and risk taking ultimately result in an experience of the universal. Lidia had put up a quote about the wisdom of trusting emergence rather than forcing things on her studio wall some time ago. Jeff trained his camera on that quote and his comment about how well that quote expressed what happened the previous day is included in the video soundtrack.

After the doubt, empathic support, and effortless expansive creative flow, the completion of the painting recognized by a hug, felt particularly powerful. That hug also symbolized the closeness the practice supported. I could not help but be grateful that we were capturing all that on video.

I am glad we discussed our common belief that creativity is not just for professional artists. Nor is it just for the young. Contrary to what younger people might believe, older adults can actually experience reduced anxiety and increased life satisfaction; they may no longer care as much about what others think about them, bringing a new and most welcome sense of freedom that supports creativity. In fact older adults bring a number of gifts to tea and dialogue practice. Creative tea and dialogue is certainly not just for professionals as this joyous example shows.

I am most grateful for the generosity of these talented artists:

Jim Flavin is a musician and certified practitioner and teacher of Jikiden Reiki. He collects percussion instruments from all over the world and shares them with others in the drum circles he leads. His work as a contractor provides many opportunities for the practical application of mindfulness. He believes in spreading unconditional love through expressing respect, kindness and honesty in all relationships.

Lidia Kenig-Scher is an award-winning mixed media artist and transformational catalyst. Her intuitively conceived works are installed in the interiors of successful homeowners and entrepreneurs, many of whom claim that the art emits a vibration capable of positively affecting their lives and the spaces where the art is installed. This highly decorated interior designer and Feng Shui master also teaches people to “paint from the heart,” a meditation-based technique grounded in more than 40 years of Buddhist practices and intense spiritual work. Lidia notes that her artworks invite personal growth because she too starts by opening her heart and trusting her brush to paint the truth.

Jeffrey Klein is a bilingual videographer with a 25-year career in multi-media production in Japan and the United States including podcasts and videos intended for retail, business, entertainment and educational contexts. Samples of his work are available at his website.

Painting of The Unending Sea of Blessings by Lidia Kenig-Scher

“The Unending Sea of Blessings”

According to William Scott Wilson in The One Taste of Truth: Zen and the Art of Drinking Tea, page 135:

“This phrase from the Kannon-kyo is the summation of the life, free of obstructions, that we can have if we put faith in the Bodhisattva Avalokitesvara.

If, in a lawsuit, you stand before a magistrate,
Or are in dread and fear on the battlefield,
Think upon the power of Avalokitesvara,
And all the myriads of enemies and their hostilities will retreat and disperse.
The wonderful sound, the Perceiver of the World’s Sounds,
Brahma’s sound, the sound of the tidal sea
Surpasses the sounds of the world
And for this reason, should be constantly kept in mind,
Thought by thought, never giving rise to doubts.
Perceiver of the World’s Sounds, pure wisdom:
When in pain, suffering, or close to death,
He is able to provide a foothold and support,
Provided with all merit and virtue;
His compassionate eyes never leave sentient beings:
An unending sea of blessings.
For this reason, you should bow with deepest respect.

It is also a recognition that despite all our grousing and discontent, we are already fully blessed. To truly understand this, however, we must get past our egocentric selves. Avalokitesvara, the Bodhisattva of Compassion, enjoins us to act not in response to our own pain and suffering, but to that of all other sentient beings. This Bodhisattva is often depicted with a thousand eyes with which to see suffering the world over, and a thousand arms with which to act for its cessation.

In some understandings of Buddhism, all Buddhas, bodhisattvas, and attendant gods are reflections of our own potentialities. In this way, Avalokitesvara is the Unending Sea of Blessings, and we ourselves are Avalokitesvara, and are ourselves the source of unending blessings.”

With its seeming love for the one-of-a-kind and constant change, the natural world can be quite worthy of our detailed inspection. Even an oddly unique, or broken and incomplete natural object can be so beautiful it can take our breath away. There is a story about Sen no Rikyu, a famous Japanese tea ceremony master – he shook a few leaves onto the moss after a tea garden was cleaned a bit too perfectly. Leaving a few fallen leaves on the moss points to the wonder and mystery of reality as it really is.

We care about others’ approval because we need others in order to survive, and that can have us wanting to be perfect. But perfection in the abstract is a rather odd concept when you think about it. Toward what end? And according to what standards does it operate, anyway? What matters to one person may not matter at all to another and different cultures value different things.

I have found that people actually love it when we accept ourselves, imperfections and all, and when we can be open about feeling vulnerable at times. Those who can accept their own imperfections tend to have an easier time accepting them in others which can be a great relief given how much we tend to fear being negatively judged.

Japanese tea ceremony teaches many lessons through the actions involved in sharing tea while engaging with various objects. For example, a beautiful tactile tea bowl like the one made by my Japanese tea ceremony teacher, Giselle Maya, may be misshapen or have imperfections in its glaze that resulted from a collaboration with the kiln fire. Irregularities and burnishing from age and use can add great depth to beauty, something that we can learn to appreciate in each other as well as in tea bowls, even mended ones. 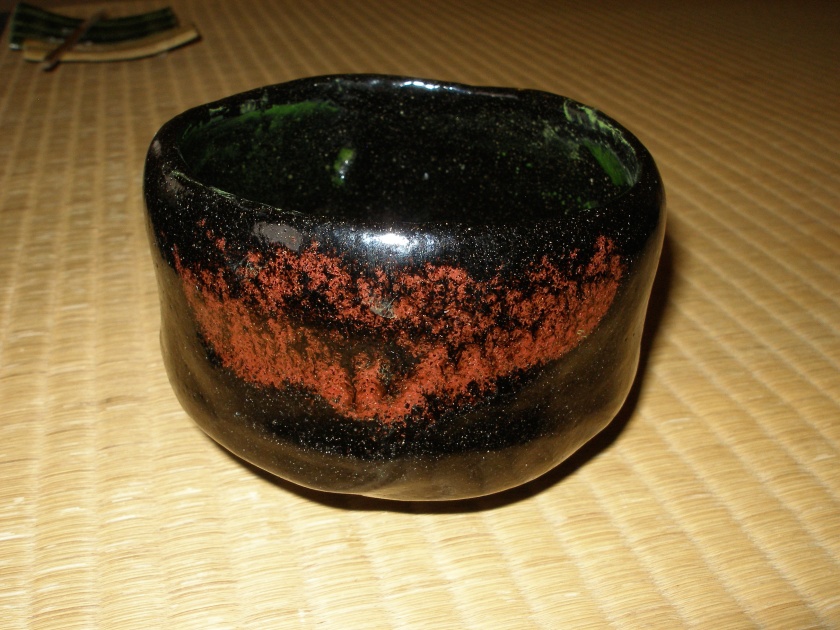 The subtle and hard to define Japanese concept of “wabi sabi” embraces imperfection. It recognizes that since everything is constantly changing, perfection is impossible, except in perfect moments as Beth Kempton notes along with wonderful examples in her Wabi Sabi: Japanese Wisdom for a Perfectly Imperfect Life.

I find that looking for a beauty that embraces imperfection can provide great solace. At times we can even catch others and ourselves in the act of being beautiful. And seeing the light shining through that deeper beauty can connect us to all that is.

Below are examples of imperfect beauty that called out to me. I recommend the wonderful adventure of finding your own examples. 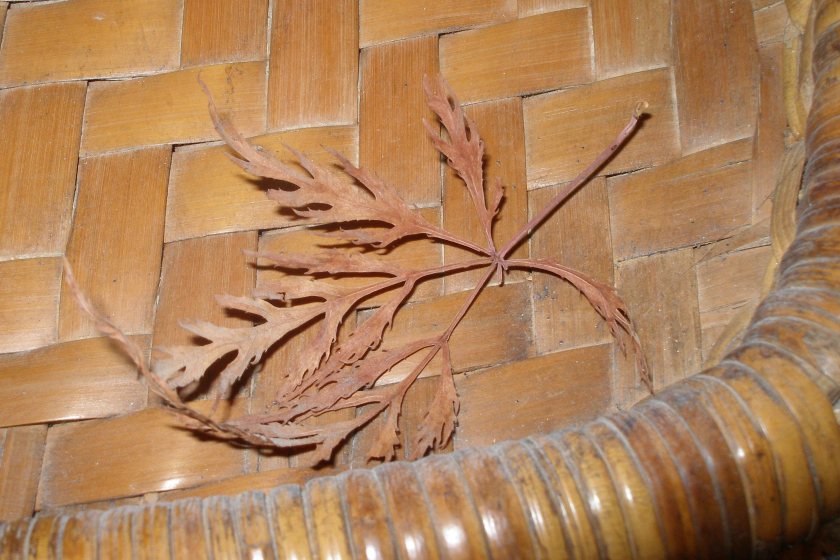 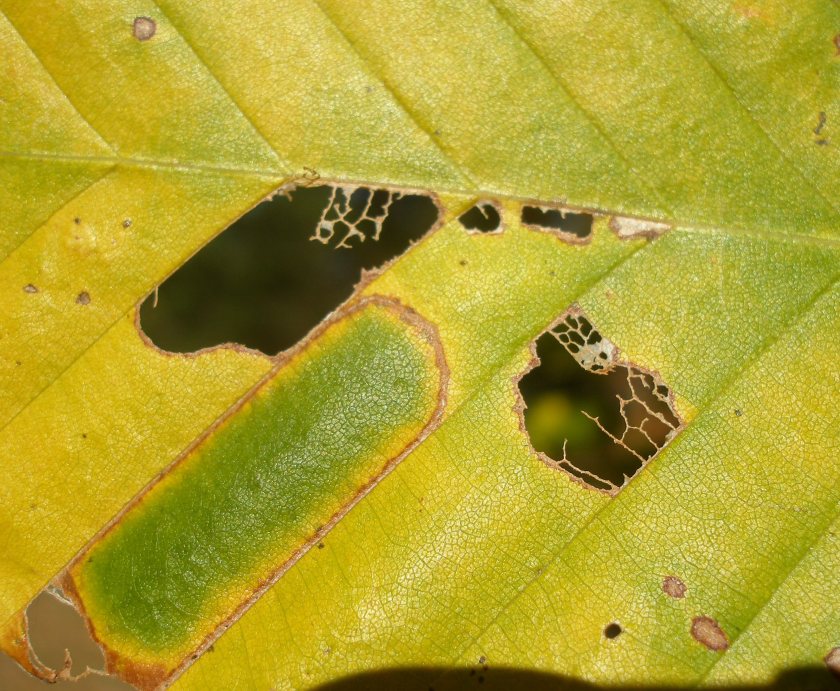 Many viewing stones are completely natural, although some are cut so they can be placed cut side down in a carved stand. With an impact that belies their small size, viewing stones can be highly evocative of mountains, waterfalls, or pools. They are worthy of contemplation for the response they produce in us.

At times they resemble animals or are prized for their surface patterns. A tiny figure may be added to complement the mood of a stone. Larger ones are displayed outside in gardens. Placing a number of them together on a stand provides an opportunity to linger and enjoy the “conversation” among their diverse colors, shapes and textures.

In June, 2019, a bunch of us shared art and crafts in a wide variety of media at Park Avenue Congregational Church. When someone (or in this case someones Karen Stark and Gwendolyn Phelps) takes the lead in organizing one of these shows, the results can be quite interesting. With luck, that will encourage those who think what they create is not good enough to submit their work anyway. We can all communicate things that matter this way. It need not reach the level of high art to express the joy of being alive. Children understand this. We should all learn from them. 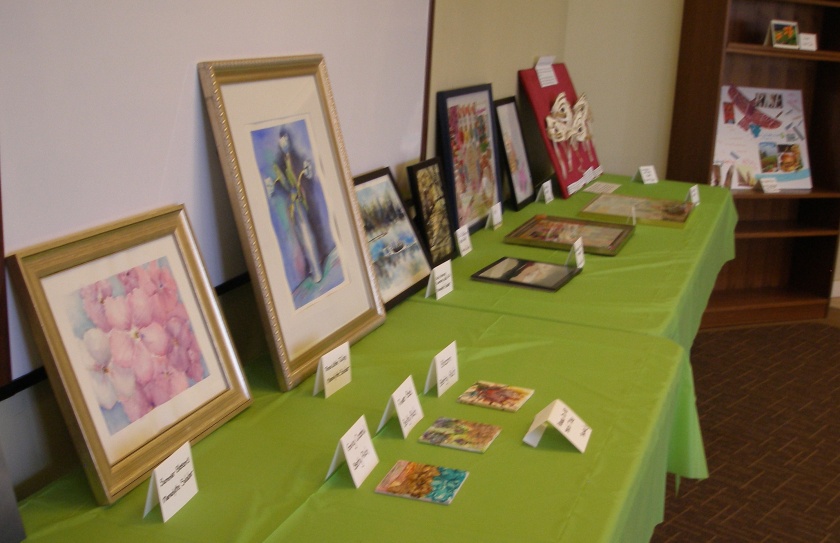 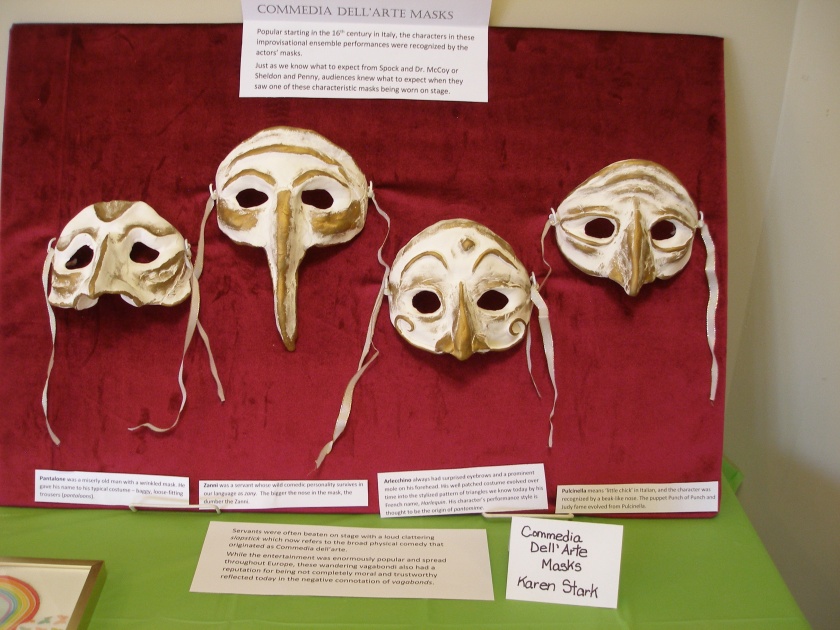 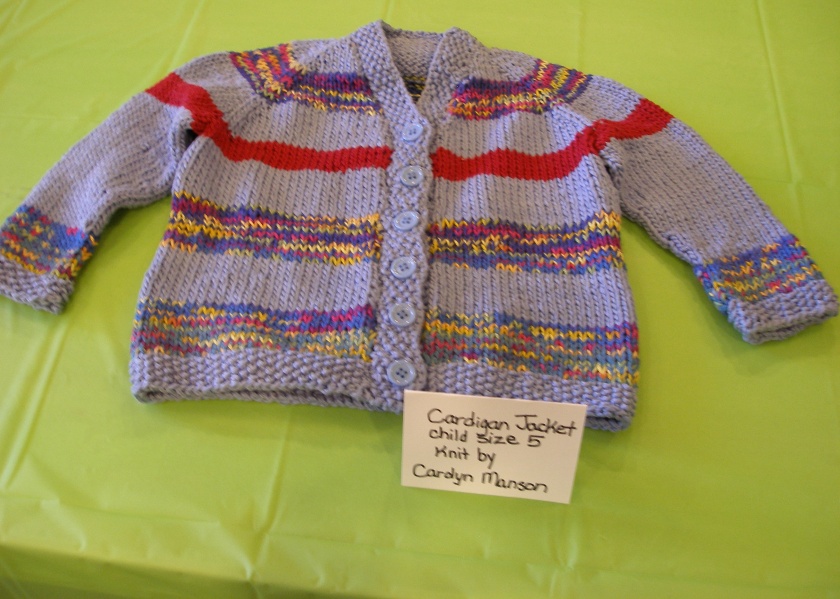 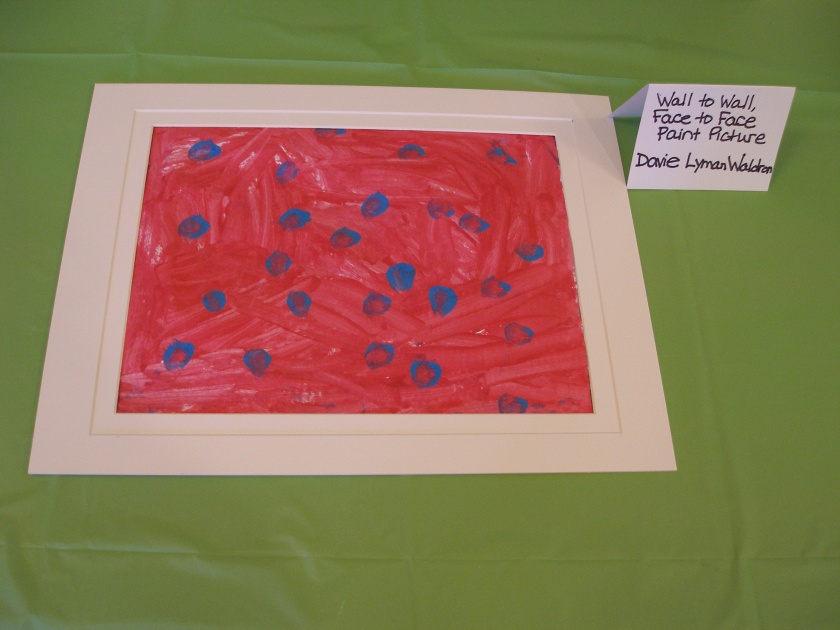 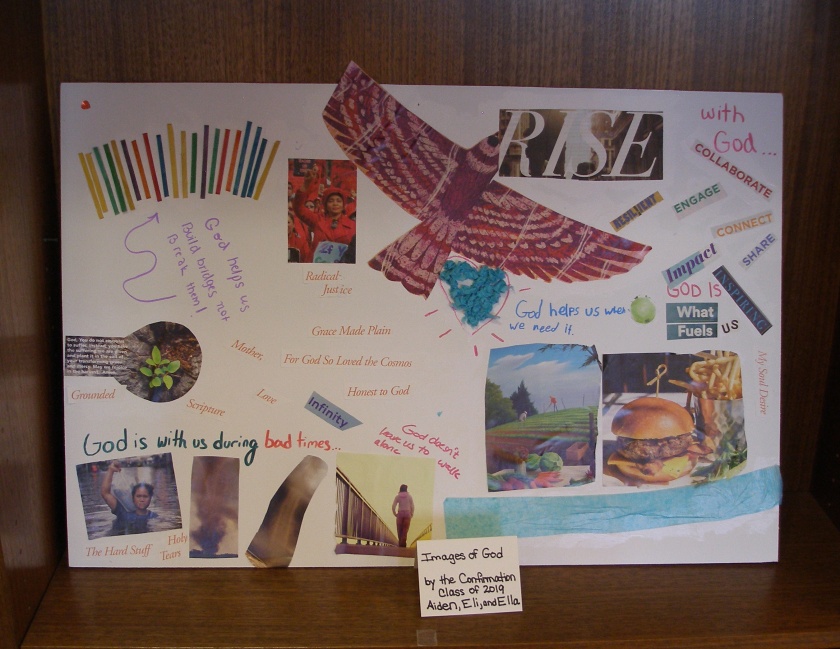 On September 7, 2014, a unique event took place to celebrate a local landmark (below) turning 90 years old. The notice I saw spoke of images of local places by both youth and adults. Each art work would be briefly projected on the substantial Arlington Reservoir structure before another took its place. Curious, I took my camera and portable canvas-seated sling bench to the classical revival water tower.

The images can only hint at what it was like to walk up the road to the top of the hill as the glowing tower came into view and then to join the crowd that had gathered there as darkness descended and the Luminarium Dance Company interpreted the images to music issuing from two large loudspeakers. 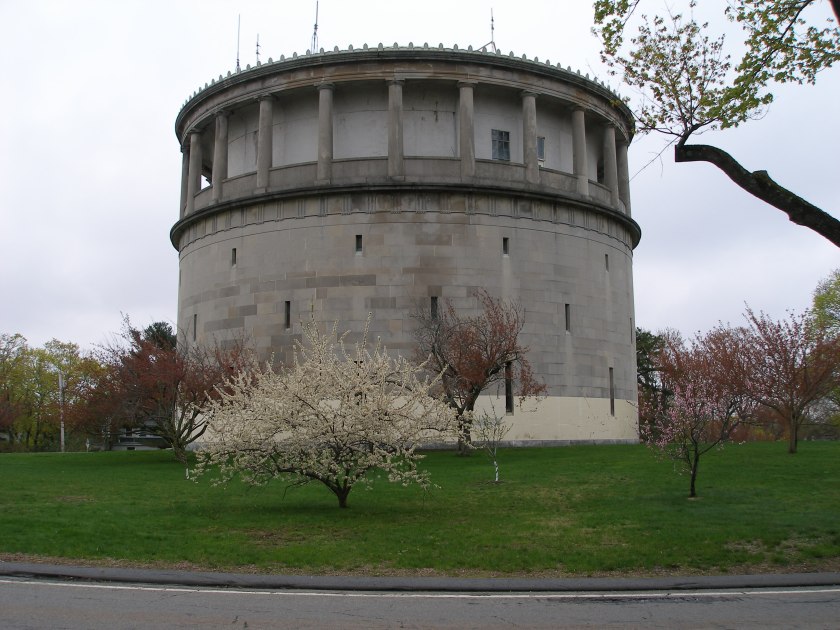 I had the shadow box for some time before I discovered what I wanted to do with it. It was a multi-step process: 1) Pick a stone, 2) Find or take a photo with something to say about it, 3) Arrange them together in the box, and 4) Take a photo of that. I did not know what would happen. The ones I struggled with the most could come together in perfect balance in the end. I kept thinking of new possibilities until it was time to stop. But this could be endless. Stones just have resonance. 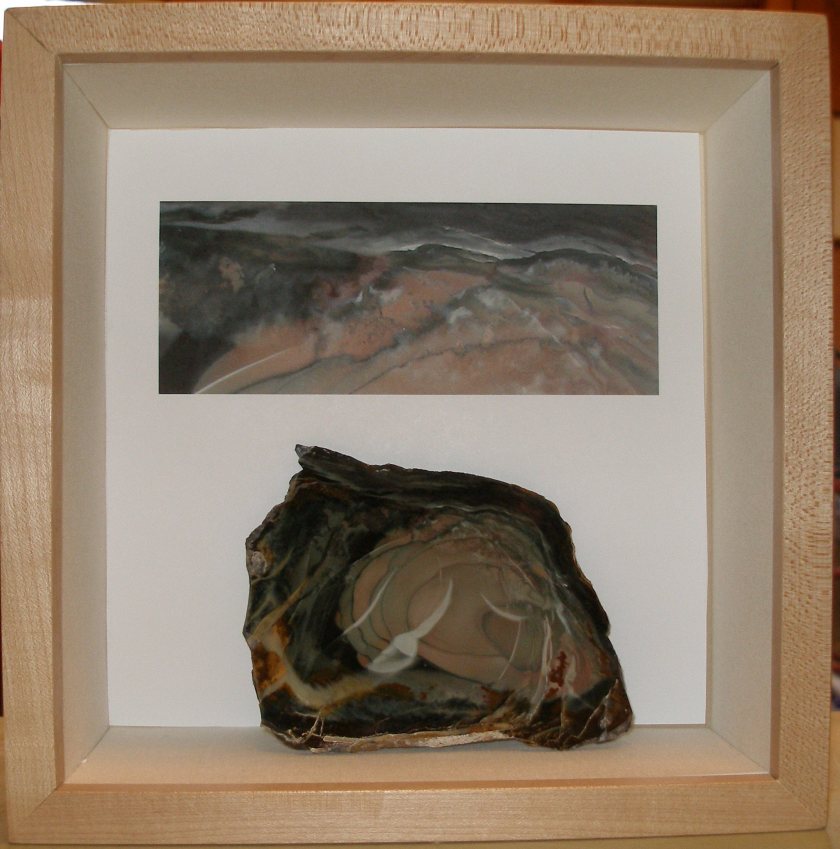 Morrisonite jasper slab with closeup taken from the top right. 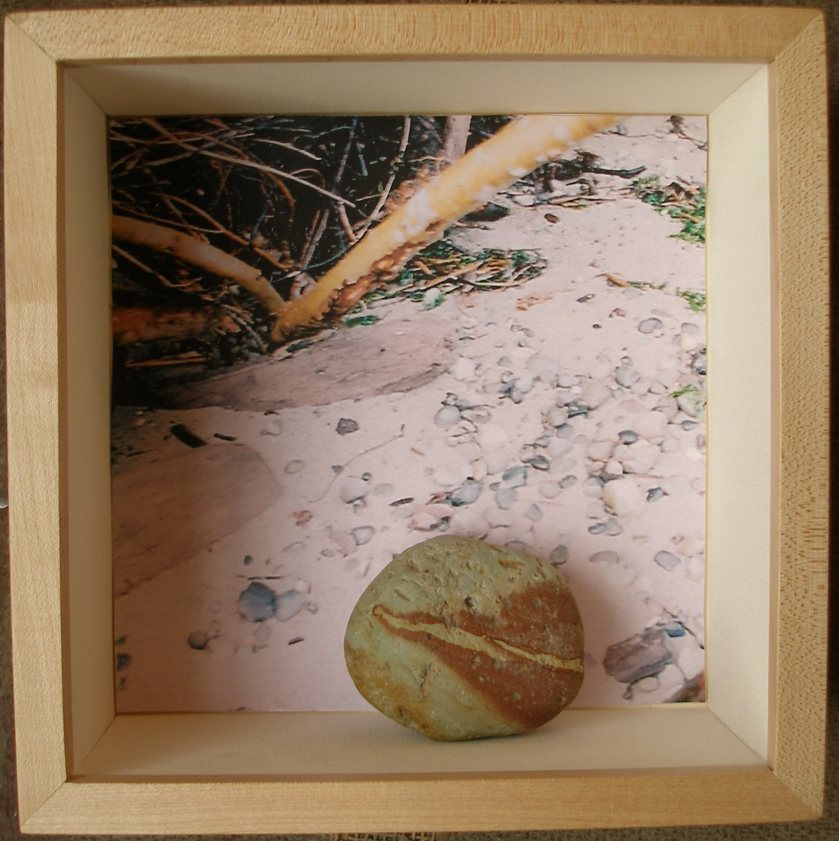 Jasper pebble & the Whidbey Island beach where I found it.

Please note that except for the articles that were originally published elsewhere which may not be copied, Radiant Refuge and all images are by Kathleen M. Fink and are licensed under a Creative Commons Attribution-NonCommercial-NoDerivs 3.0 Unported License.