As children, my brother and sister and I loved to catch fire flies and release them down by a falling-apart stone structure behind our camp site in New Hampshire. Dolly Copp, an early settler to this location in the White Mountains had constructed a well-like structure to capture the water of a stream and then pipe it to her homestead downhill. Over the years as we returned to the camp site, we watched as the structure became less recognizable as it tumbled apart.

I tried to capture that structure at one stage of its existence in my own garden. I stopped moving the stones about when they seemed to “disappear” – When they had blended into the universe comfortably with no need to speak individually for themselves. 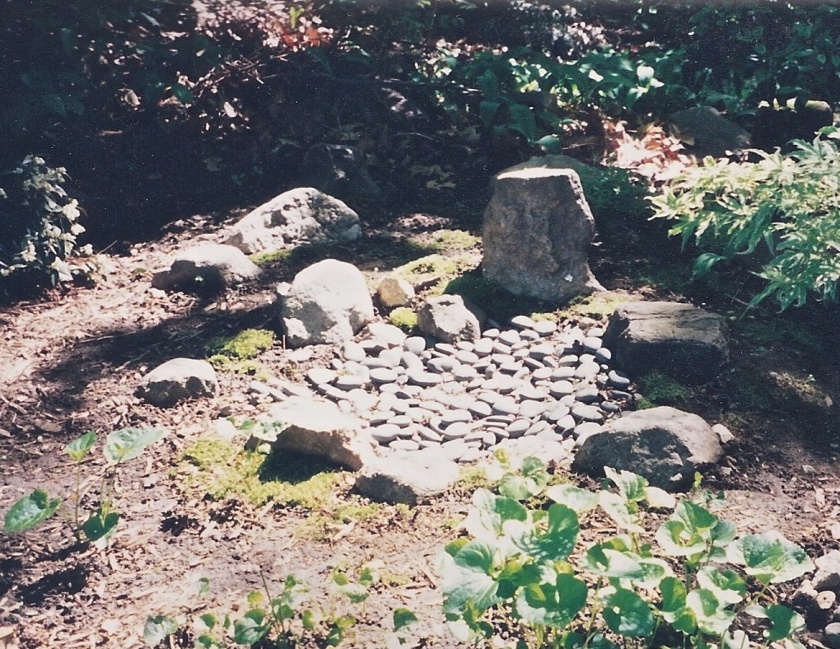 Before I travelled to Japan to see its remarkable gardens, I had read about the famous Japanese garden Ryoanji with its stone groups set in raked sand that you can see in this video. I doubted that this garden would live up to all the hype, perhaps to save myself from disappointment.

We avoided the crowds by arriving at opening time, but there was no way to avoid a blaring broadcast in English. I tuned this out as best I could, until it ended with, “each person must find his or her own meaning.”

Although it was overcast, I noticed shadows on the sand cast by the surrounding wall and trees. One of my first impressions was the importance of the wall. I then became impressed by the large amount of open space; clearly, the point of this garden was not just the individual stones, although each was beautiful:

Gradually, I became aware of a low singing current passing from group to group and stone to stone. This grew in strength, zinging about. The key to this phenomenon seemed to be the specific arrangement. The intensity grew to unbelievable levels, and the stones ‘disappeared.’ It seemed like the configuration before me was a model of a vast, singing version out in space. It was full of immense power and it was beyond beautiful.

Although precious to me, my garden stone arrangement does not evoke the vast energy I experienced at Ryoanji. I sometimes think about Ryoanji’s designer and what price was paid to be able to get that particular arrangement just right.

My writing and consulting aim to inspire engagement with resources for wellbeing. View all posts by katzlator

Please note that except for the articles that were originally published elsewhere which may not be copied, and where noted for photos by others, Radiant Refuge and all images are by Kathleen M. Fink and are licensed under a Creative Commons Attribution-NonCommercial-NoDerivs 3.0 Unported License.